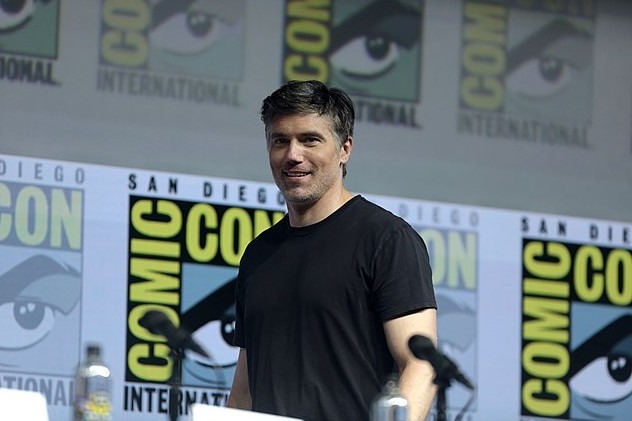 From his father’s first marriage, Mount has an older brother (Anson Adams III) and two sisters. Mount’s great-great-great grandfather was a Confederate cavalry colonel in the Civil War.

Anson Mount was keen on becoming an actor from a young age and had the full support of his parents. He perfected his skills by attending acting classes .

Mount graduated from Columbia University, New York, NY, with a MFA in Theater in 1998. He also studied acting at Michael Howard Studios in New York City.

On July 8, 2017, Mount announced his engagement to his longtime girlfriend Darah Trang.

Trang was born in Vietnam and her parents were Vietnamese. Their family decided to move to Canada when Vietnam War was certain to happen, they took Canadian citizenship thereafter. After her studies she came to the US to seek better opportunities in jobs and photography.

Trang was brought up in a middle- class family in Alberta Canada, she has one elder sister and two younger sisters, she completed her Bachelor’s degree from the Alberta College of Art in Canada and moved to New York to complete a degree in fine arts from the School of Visual Arts in New York.

Trang became famous for being the wife of Mount. He supports his wife and Trang continues her job with the help of photo-sharing platforms and social media platforms.

They were married on February 20, 2018, after dating for six years.

They welcomed their first child, a daughter, named Clover in December 4, 2022

Currently Mount lives with his wife , child  and three dogs in Brooklyn, New York. He is active on social media where he has a large fan base.

Mount’s career centered on four works, these include stage, film, television and academics but he had more works in film and TV.

In 1998 he started working on stage via Cymbeline, Corpus Christi and The Caucasian Chalk Circle. In 2002 he took the role of a photographer in Elle. In 2002 he acted on Glengarry Glen Ross and in 2009 in Mourning Becomes Electra.

From year 2000 until recently in 2022 Mount have been casted in films. In 2000 he participated in Urban Legends: Final Cut, Tully and Boiler Room.

Mount has also been active in television and took several roles from 1999 until this year 2022.

He took a role in The Ready Room from 2019- up to present, he is also casted in Dota: Dragon’s Blood from since 2021, he is also doing Star Trek: The Strange New World to date.

He has published non-fiction pieces in Mosaic, The Daily Beast, Cowboys & Indians magazine, and the Calgary Herald.

It is also good to note that Mount on his early works has lend his voice as Sebastian Castellano in 2014 The Evil Within and in 2015 the Assignment video games.

Mount writes, produces, and hosts The Well podcast with his longtime friend Branan Edgens. He has served as a narrator on the Pseudopod podcast, reading the Thomas Ligotti story “The Town Manager.

On May 2022, Mount appeared on the tv series Star Trek: Discovery as Captain Christopher Pike, and also returned to the Marvel Cinematic Universe.

He appeared in the film Doctor Strange in the Multiverse of Madness as Black Bolt, the Inhuman king he last played in ABC’s Inhumans.