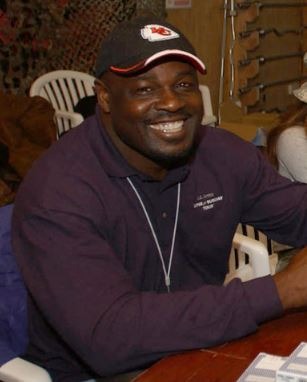 Nigerians have had great successes in the field of sports, particularly basketball. Some of the country’s most well-known athletes include Hakeem Olajuwon, Yinka Dare, Obinna Ekezie, Festus Ezeli, and Olumide Oyedeji. It’s past time to bring up another well-known figure hailing from the Giant of Africa: Christian Okoye or more famously known as the ‘Nigerian Nightmare’. If you are unfamiliar with this moniker, you must read this article until the end!

Christian Okoye is a Nigerian-born American football player who formerly played for the NFL team, the Kansas City Chiefs. He was a famous personality, known for being one of the first African football players to become a superstar in the league. In a sport that has been dominated by white males since its creation, Christian Okoye had a natural talent and ability that defied the odds against him. He did not allow his skin color or his origins to stop him from achieving his goals.

Born on August 16, 1961, in Engu, Nigeria, Christian Emeka Okoye is a member of the Igbo ethnic group, a group that can also be found in present-day Cameroon, Gabon, and Equatorial Guinea. Raised by Nigerian parents, he came from humble beginnings and didn’t have much to live by. Okoye was a big fan of soccer and loved playing the sport every time he was among his peers.

Christian Okoye grew up as a soccer player and had no intention of playing football. Coming from a family of humble origins, Okoye did not have the access to equipment that most children today can easily acquire. It was said he would often play with a ball that is made of tape and string, plastic bags filled with sand, or any locally made soccer ball just for the fun of it. Aside from being inclined with soccer, he also participated in track and field.

Things finally changed when Okoye moved to Azusa, California back in 1982 after he received a scholarship at Azusa Pacific University, wherein he participated in various sports such as shot put, discus, and the hammer. Within four years, Okoye helped lead APU to four NAIA Track and Field titles. Not only that, but he also won seven titles combined in the discus, hammer throw, and shot put. It has been part of Okoye’s decision to attend APU because it has been his dream to represent Nigeria in the Olympics. However, he was devastated when Nigeria refused to choose him to represent them.

He first declined his friends’ encouragement in trying out football as he perceived it as a “boring sport” and was not interested in it. But once he finally got the gist of the game and its dynamics after being persuaded by his friends, he was greatly eager to showcase his enthusiasm for the said sport. After taking on the challenge of playing football, he quickly caught the eye of different scouts from various colleges before finally deciding to go pro and entering the NFL Draft in 1987. Okoye was undrafted but he still managed to make it into the second round before being selected by the Kansas City Chiefs wherein he made history being the best African-born football player the league had ever seen.

Okoye’s immense abilities astounded A lot of professionals. For a man his size (6’1” and 260 lb), his speed was astonishing. He was then given the nickname “The Nigerian Nightmare” because of these abilities, which he willingly passed on to the current UFC welterweight champion Kumaru Usman.

Christian Okoye was the first ever NFL African-born player that became a superstar. Not only one of the best players in Chiefs history but also one of the most accomplished Nigerian players in American football history. He became one of the top defensive linemen in pro football due to his size and speed.

Okoye never won a Super Bowl in the entire span of his career. However, he is considered one of the greatest Chiefs players of all time. After seven years with the Kansas City Chiefs, he retired from football. One of his most memorable plays was the one against the Miami Dolphins in 1988, where he picked up the fumble and ran 91 yards to score a touchdown. But Okoye’s legacy goes much deeper than his amazing moments in football. Being the first African-born NFL player, he paved the way for other talented Africans to succeed in America’s favorite sport.

Christian Okoye is likewise celebrated as a philanthropist who has founded the Christian Okoye Foundation–a foundation that caters to underserved and disadvantaged youths.   By providing free athletic clinics where well-known professional athletes coach the kids, the Foundation attracts at-risk and underprivileged youth. Christian emphasizes the importance of drive and commitment in motivating at-risk adolescents to establish and attain their goals in life. The “Nigerian Nightmare” uses athletics to teach kids the significance of education, community, focus, and drive through his Foundation’s free summer sports camps. The philanthropic efforts of Christian are heavily influenced by his gratitude for the many opportunities that athletics afforded him.

Where is He Now?

Currently 60 years old, many people have wondered where Okoye is now. He actually became an investor in the Golden Baseball League and the owner of Okoye Health and Fitness after retiring.

He also manages the Christian Okoye Foundation, which assists the Nigerian government in hosting sports clinics for impoverished children which are among his life’s many proud accomplishments.

Okoye also knows a lot about dedication, perseverance, hard work, and whatever words you can find to describe impossible made possible after making the Pro Bowl two times and first-team All-Pro two times without knowing anything about American football before he arrived at Azusa Pacific University in 1982. Naturally, he is invited to many guest appearances and public guesting. Mr. Okoye says, “There is a blueprint in life that ties to everything we do.” The main focus in his talks is motivation, and his motivational remarks emphasize that most topics can be made simple if tackled passionately.