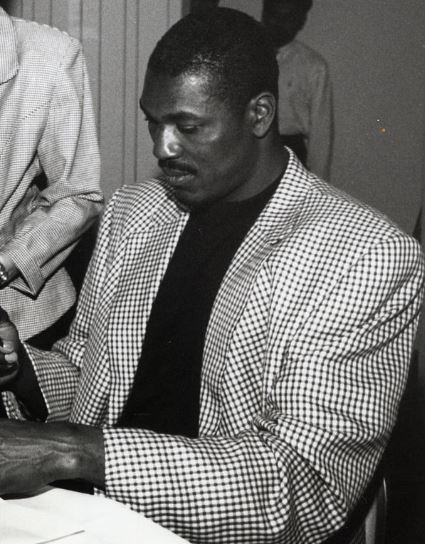 There are only a few basketball players in the NBA that are often called the greatest of all time or the GOAT, and one of those few players is Hakeem Olajuwon. The Nigerian-born basketball player has played in the NBA from 1984 to 2002, and for most of his career, he served as the center for the Houston Rockets, who drafted him with the 1st overall pick in the NBA Draft in 1984 ahead of Michael Jordan, another player that is considered as one of the greatest in the sport.

Hakeem Olajuwon won the NBA Most Valuable Player award in 1994, and he has also become a two-time NBA Champion from 1994 to 1995. Moreover, he has also been included in the All-NBA First Team six times and has been an NBA All-Star 12 times. While many people know about Hakeem Olajuwon’s illustrious career as an NBA player, there are only a few that know about Olajuwon’s Nigerian roots. Here are the things that you should learn about the famous Nigerian basketball player Hakeem Olajuwon before he joined the NBA.

Hakeem Olajuwon, whose nickname is “the Dream,” was born on January 21, 1963, in Lagos, the largest city in Nigeria. Olajuwon’s parents, Abike and Salim Olajuwon, are part of the West African ethnic group called Yoruba and are owners of a cement business in Lagos. Hakeem Olajuwon was the third child out of eight, and he would often credit his family being the source of his values and virtues, which includes discipline and hard work.

While most of Nigeria is filled with vegetation, Hakeem Olajuwon often reiterated in interviews that Lagos and even the whole of Nigeria are not developing backward and are actually culturally and economically diverse. In fact, Olajuwon would describe Lagos as a very cosmopolitan city since there are many ethnic groups and Nigerians living there.

Although Hakeem Olajuwon is considered one of the greatest players of all time in basketball, he actually did not play the said sport until he was 15. The first sport that he played and surely loved was football or soccer, and when he was a child, he would often play as a goalkeeper because of his size.

According to Olajuwon, football helped him develop his footwork and agility, which would later become beneficial for him in playing basketball despite his height. In addition, keeping his eyes on the ball and predicting when it will hit the net also helped him in his shot-blocking ability in basketball. Interestingly, he led the NBA in blocks in 1990, 1991, and 1993, and he also became the Defensive Player of the Year in 1993 and 1994 because of his incredible ability to block shots.

The first time Olajuwon played basketball was when he joined a local tournament at the age of 15 at the Muslim Teachers College in Lagos. During his time at the said school, it was reported that Olajuwon was once asked by a coach if he could dunk a basketball. The coach, who was not as tall as Olajuwon, stood on a chair in order to demonstrate how to dunk. Olajuwon then replicated what the coach had done, although he was instructed not to use a chair. Despite being tall, Olajuwon was unable to dunk during that time.

Even though he was struggling to play basketball during his early teenage years, Olajuwon grew to love the sport. During one interview, Olajuwon would say that he saw that basketball was his life as soon as he picked up the sport’s ball for the first time. Moreover, he would also say that other sports became obsolete when he fell in love with basketball.

Olajuwon was not really a highly-regarded recruit during that time, which is most likely attributed to where he came from, as many recruits in the NCAA or National Collegiate Athletic Association only focused on American players or potential recruits playing in the United States. When he arrived in the US for the first time, Olajuwon was not greeted by a representative of the university, and when he called one of the school’s staff members, he was informed that he should just take a taxi.

For his freshman year in 1980, Olajuwon was redshirted (delayed or suspended participation) from the NCAA because he was not able to get a clearance from the organization. In his sophomore year (which is technically his freshman year for the Cougars), Olajuwon would be the Cougars’ sixth man and would be called from the bench when a player was replaced or substituted from the court. In the said year, Olajuwon would show potential, as he would average 8.3 points, 6.2 rebounds, and 2.5 blocks in just 18 minutes of time per game.

Olajuwon, who wanted to increase his playing time, sought advice from the coaching staff on how to improve his skills. He was then directed to train with Moses Malone, a multiple NBA MVP awardee. Olajuwon credited Malone multiple times for helping him elevate his skills to a much faster level. 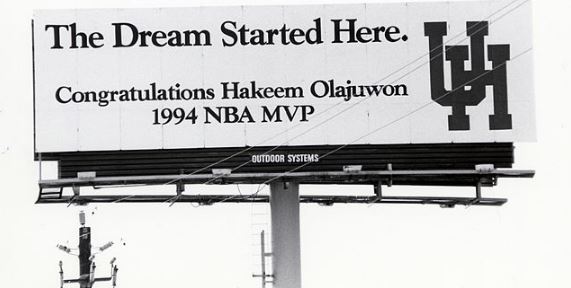 During his junior year, Olajuwon was described by the coaching staff to be a much different player than before, thanks to the training he had with Moses Malone. When he dunked effortlessly during one particular practice session, his coach said that his dunk and his effortless movements “looked like a dream.” From then on, Olajuwon would be nicked “the Dream.” Because of his improvements, he was able to win the NCAA Tournament Player of the Year award in 1983, despite not being able to win the championship, as they lost to the North Carolina State Wolfpack in the finals.

Following the 1983-1984 season at the University of Houston, Olajuwon was contemplating whether to declare for the NBA Draft or to stay in college. Before the draft lottery was created for the NBA in 1985, the first pick of the draft would be decided by coin flip.

The two teams fighting for the first pick were the Portland Trail Blazers and the Houston Rockets. Fortunately, it was the Houston Rockets that won the coin flip, as Olajuwon really wanted to play for them. Olajuwon was then officially drafted as the first overall pick, ahead of future fellow Hall-of-Famers John Stockton, Charles Barkley, and Michael Jordan.