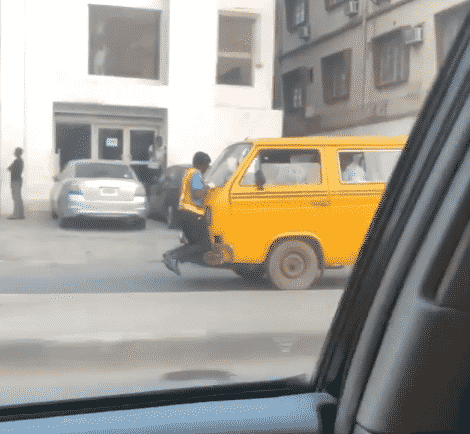 Out of the usual routine day, a mild drama occurred in Lagos state, as a policeman was spotted clinging to the bonnet of a commercial bus as the driver was speeding off, attempting to evade scrutiny.

According to a viral video shared by a netizen with the Instagram handle @theaplhaleke, the policeman was spotted clinging to the bonnet of Danfo commercial bus after its driver was speeding off in Sabo, Yaba area of Lagos state.

As she posted the video, @theaplhaleke wrote the caption (written as it is):

“Earlier today in sabo, yaba; what do you think happens when you refuse pay for officer’s lunch? Me I’m just saying oh… who knows, that asshole might actually committed a traffic offense.”

Watch the viral video clip below: