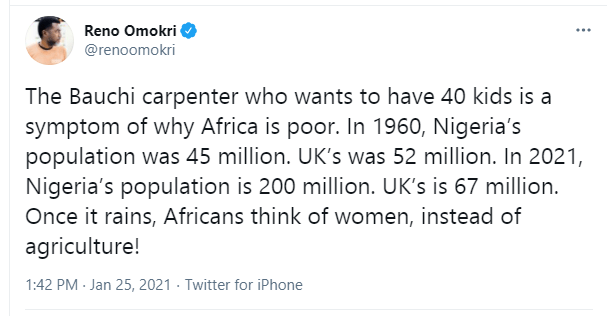 Nigerian lawyer, author, and human rights activist Reno Omokri has reacted to a story about a Nigerian carpenter who wants to have no less than 40 children.

Omokri, who is a former aide to ex-President Goodluck Jonathan, has reacted on Nigeria’s current population, which has ballooned to over 200 million.

Several media outlets in Nigeria reported that the carpenter is based on Bauchi and within only three weeks, he has welcomed is 10th, 11th, 12th, and 13th child.

The man, who is polygamous, has said that it has always been his childhood dream to have as many children and added that he will not let himself up unless he achieves it.

With the new births, the carpenter now has 13 children – 10 sons and 3 daughters.

“Once it rains, Africans think of women, instead of agriculture!”

Reacting to the news of the polygamous man, Mr. Omokri stated that it is a symptom of why Africa is poor. He added that Africans think of sex when it rains and not agriculture.

He even compared the population growth of Nigeria and the United Kingdom over the years.

In addition to being a lawyer and best-selling author, Reno Omokri is also a human rights activits. He stars in his own travel documentary, Reno Around the World, which is broadcast in both Nigeria and the United Kingdom.

Mr. Omokri was born in 1974 and is a graduate of the University of Wolverhampton with a master of laws degree.

He is also Vice President of Joe Trippi and Associates, an American political consulting firm.

During his tenure as former President Jonathan’s special assistant, Mr. Omokri used social media as a tool to conduct surveys and draw attention to the projects of the Nigerian government.