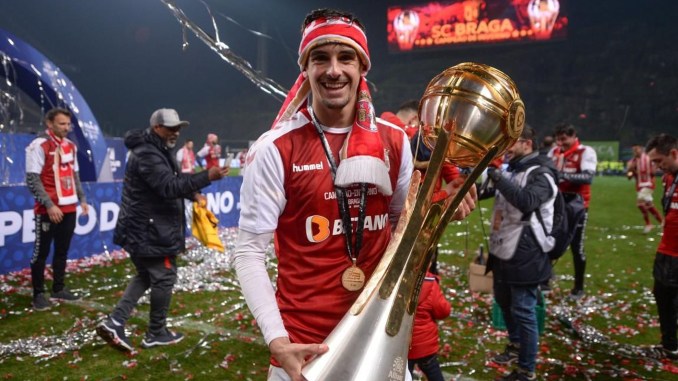 FC Barcelona and SC Braga have reached an agreement for the transfer of the young Portuguese star winger Francisco Trincão.

Barcelona have confirmed that they will sign Trincão from SC Braga with in a €31-million (£26 million or $34 million), five-year contract.

The 20-year-old winger will join the Barcelona outfit this July, having agreed to sign a contract that will run for the next five years until its expiration in summer 2025. Furthermore, it will also include a release clause worth €500 million (£420 million or $550 million).

The young Portuguese forward can play anywhere up front, but Trincão is mostly used as a winger.
Trincão made his debut in late 2018, playing for the Braga senior team. Since then, he has made 30 appearances. He has represented Portugal at different levels up until the Under-21 squad, of which he is currently a member.

With the Under-19 team, Trincão was part of the side that won the European Championships in 2018. At the end of the tournament he emerged as the joint top-scorer with five goals. He also topped the assists department with three.

Once he formally joins Barcelona this coming July, Trincão will provide an additional attacking option for the team once the 2020-2021 season opens.

Trincão has started mostly on the right wing for Barca. However, he is left-footed and he has also started on the left flank and in the attacking field. He is a quick player, naturally gifted with a sharp vision that has enabled him to create goals as well. The new Barca player can also take on defenders with his dribbling skills.

Born in Viana do Castelo, Portugal on December 29, 1999, Francisco Trincão began his playing career when he was young with hometown club Vianense. He also played for Porto, Braga, and Palmeiras Braga.

Trincão made his senior debut in 2016 for Braga’s reserves in Segunda Liga. He turned to be a vital part of the group that won the 2019-2020 Taça da Liga with Braga.

And as you’ve read that Trincão has joined Barcelona in a lucrative contract, things will definitely look up for this young Portuguese football sensation.

Best known for:
Playing as a winger for the Spanish football club Barcelona and the Portugal national team.