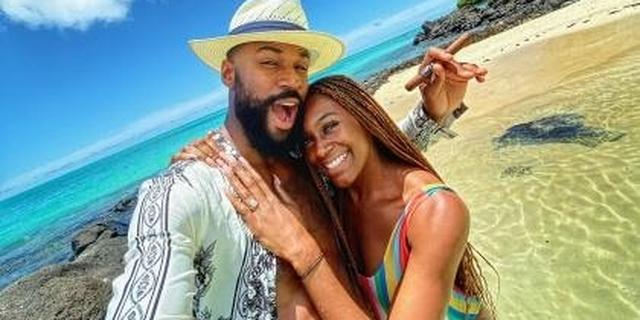 For a lot of people, January signifies a return back to the grind after all the December holiday festivities and spending.

But for BBNaija Season runner-up Mike Edwards, the holidays must go on.

If you could recall, one of the games of the Big Brother Naija house was sponsored by Lipton Ice Tea where each housemate was required to put pieces of a puzzle together to reveal the Lipton Ice Tea bottle. And Mike Edwards emerged as the winner of that challenge.

He received a one million naira cash and a trip for two to the island country of Mauritius.

At the end of the BBNaija season, Edwards was presented a huge check from Lipton. Apart from the 1 million naira, Lipton also gifted an extra 500,000 for his wife.

From a recent photo posted by the former British high-jumper on his Instagram account, Mike and Perri are already having a great time in their extended holiday, which the reality TV star has referred to as a honeymoon. The photo has garnered many positive comments from his fans and fellow BBNaija housemates.

Kimoprah, also a part of the #PepperDem housemates, even gave a hint of pregnancy from the couple’s honeymoon, saying, “I’m coming in 9 months to eat, oh.”

Lipton Ice Tea launched in Nigeria last October, much to the delight of the fans, who both enjoy their suspense-filled campaign as well as the taste of their beverages.