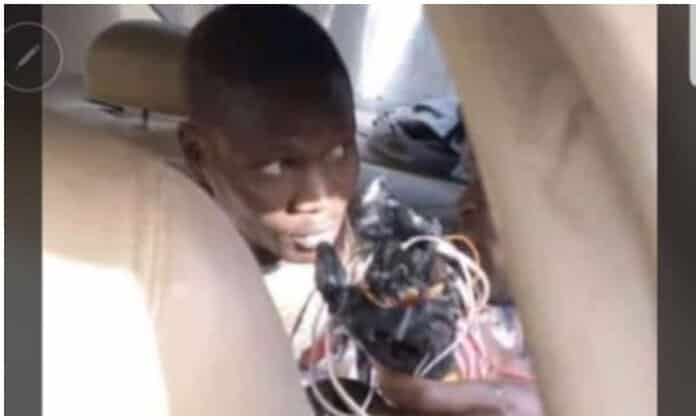 John Hayab, chairman of the Christian Association of Nigeria (CAN) said that the bombing suspected arrested while sneaking into a church on Sunday identified himself as Mohammed Sani.

Hayab claimed that after the church turned the suspect over to the police, his named suddenly changed to Samuel Nathaniel.

The suspect sneaked into the Living Faith Church, also known as Winners’ Chapel Parish in Kaduna and attempted to blow the place up by dropping his bag there, which was suspected to be full of explosives.

Hayab gave an account of what happened by saying that the church was in session when the suspect came in, dropped his bag, and left as if he was going to the restroom, but didn’t come back immediately. This is where some church members grew suspicious. What they found inside the bag indeed confirmed their suspicions — it was packed with explosives. They called the police immediately.

Hayab went on to make things clear — it was not the police who arrested the suspect. It was the church members who apprehended the suspect then turned him over to the police.

According to Hayab, the church has put security measures in place to aid the church members to monitor everything going on in the church. They have even installed CCTV cameras.

Hayab said the mix-up in the suspect’s name gives further proof to the claims by the United States that Nigeria has remained a terrorist-prone state due to the lack of database. The CAN chairman added that religion, which the suspect practices, should not be the focus of public discussions. Instead, the focus should be on the suspect’s act of terrorism.

The cleric said that the police has failed to conduct effective investigations and profliling of the suspects, adding that the police also arrested a hoodlum and mistakenly paraded him as a pastor only a few weeks ago.

The CAN chairman declared that the incident further justifies the US decision to implement visa restrictions on Nigerians, adding that the American government has said that one of the reasons of the visa ban is the lack of proper background checks on people.

Hayab concluded: “So, a criminal can go to one part of Kaduna and bear John, travel to another part of the state and bear Abdullahi or Oluwole or Emeka and nobody will know. So, let us stop focusing on his name but his crime. A criminal is a criminal.”